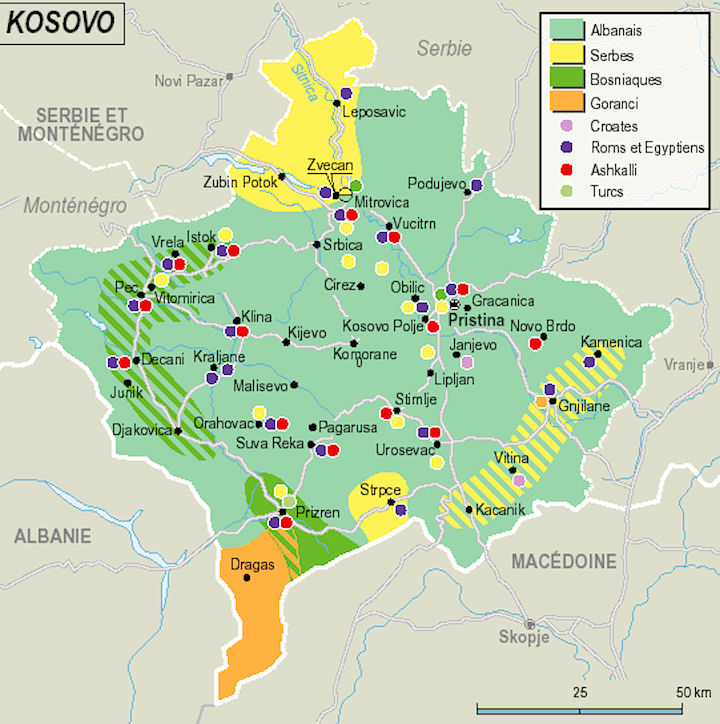 Since February 2008 Kosovo is a country in the Balkan Peninsula, locked between Serbia, North Macedonia, Albania and Montenegro.[1] Kosovo is the subject of a long-running political and territorial dispute between the Serbian (and previously, the Yugoslav) government and Kosovo's largely ethnic Albanian population.[2]

The current borders of Kosovo were drawn after the Second World War, while a part of Socialist Federative Republic of Yugoslavia (SFRY, existed between 1945 and 1991), where Kosovo was an autonomous province within the Socialist Republic of Serbia. In 1989 the Serbian President Slobodan Milosevic, reduced Kosovo's special autonomous status[3] within Serbia and started oppression of the ethnic Albanian population. Ethnic prejudices, stereotypes and the distrust between Albanians and Serbs have remained for decades. The level of intolerance between both communities was reported by sociologists to be worse than that of Croat and Serb communities in Yugoslavia. Kosovo Albanians responded with a non-violent movement[4], employing civil disobedience and creation of parallel structures in education, society and politics, with the ultimate goal being achievement of the independence of Kosovo. The non-violent movement didn’t gain sufficient support. The exclusion of the Kosovo question from the Dayton negotiations, and the continued Serbian oppression led many Kosovar Albanians to the conclusion that violent resistance, through the Kosovo Liberation Army (KLA)[5], was the only way to attract international attention.  The ethnic politics, led by the Kosovar Albanians took the form of an armed fight as tensions escalated. Their demands can be summed up with the words of Sulejman Selimi, a general commander of KLA (1998-1999) “There is a de facto Albanian nation. The tragedy is that European powers after the first World War decided to divide that nation between several Balkan states. We are now fighting to unify the nation, to liberate all Albanians …”.[6] During this period the Kosovo question turned into an ethno-political crisis. Until 1998 the international community failed to take sufficient action to prevent the crisis. As the tensions continued to rise the same year, international pressure compelled SR Yugoslavia[7] to sign a ceasefire agreement and withdraw its forces. The ceasefire did not work out and fighting continued. The armed conflict known as the Kosovo war (February 1998-June 1999) was a result of years of growing ethnic and religious intolerance and turned into an internationalised armed fight with high humanitarian and regional cost.

At the Rambouillet Accords (23 February 1999), a multilateral international conference, a draft agreement was made, calling for the restoration of Kosovo's autonomy and the deployment of NATO peacekeeping forces. The Yugoslav delegation found the negotiated terms unacceptable and refused to sign the draft, which led to the seventy eight day long air strike campaign (24 March - 10 June 1999) of NATO forces in Yugoslavia, aimed to force Slobodan Milosevic to withdraw from Kosovo. Despite the KLA was listed as a terrorist organisation by the US state department, the NATO forces fought on their side against Yugoslavian forces.

International response to the war and crisis has been vast. Although the perceptions vary, the NATO military intervention has been mainly described as illegal but legitimate,[8] because it did not receive prior sanction from the United Nations Security Council (UNSC).[9] The intervention is considered justified because of the exhaustion of all diplomatic avenues before that. The war ended with the Kumanovo Treaty, with Serb forces agreeing to withdraw from Kosovo, making way to for international presence (UN UNMIK mission and NATO KFOR mission) and the return of the Albanian refugees and internally displaced persons.[10]

International dimensions of the Kosovo question: from UNSC Resolution 1244 to the Declaration of independence

On 10 June 1999 the Security Council passed Resolution 1244 which placed Kosovo under transitional UN administration (UNMIK) and authorised Kosovo Force (KFOR), a NATO-led peacekeeping force, to enter in order to deter renewed hostility and to establish and maintain a secure environment and civil order in the (ex)Yugoslav province. The Resolution provided that Kosovo would have autonomy within Yugoslavia, affirming its territorial integrity (of Yugoslavia). The UN required the safe return of all refugees and displaced persons to their homes and the demilitarization of the KLA and other armed Albanian groups.

Resolution 1244 reaffirmed the calls for "substantial autonomy and meaningful self-administration for Kosovo"[11] and facilitated the political process to determine Kosovo's future status, taking into consideration the Rambouillet accords[12] which Yugoslavia refused to sign in 1998. According to “The Kosovo report”, Resolution 1244 created a UN protectorate, an institutional hybrid with unlimited power whose purpose is to prepare the province for autonomy and self-government but within Yugoslavia.[13] However in line with the divisions in the UN on the Kosovo future status it was clear that Kosovar Albanians won’t accept any further expression of Yugoslavian sovereignty on the province. The initial UNMIK mandate was 12 months. However, the mission is still active today, with reduced number of officials and personnel involved[14] since 2008 and after the creation of the EULEX mission[15], which itself operates within the framework of Resolution 1244, supporting the Kosovo authorities in the rule of law area. The boycotted by the Kosovo Serb parliamentarians Declaration[16] of independence was adopted on 17 February 2008. The Declaration of independence marked an end of an era in the state-building process for the Kosovar Albanians. Having in mind the partial recognition as a sovereign state and the unresolved disputes with Serbia over territories and people (Mitrovica and Presevo valley) the process is still unfinished. A final resolution of the Kosovo status would be possibly found on the basis of a mutually acceptable Kosovar-Serbian agreement. Serbia has denied to recognise independent Kosovo as Kosovo is considered a part of Serbia. Despite that all the neighbouring countries have recognised independent Kosovo.[17]

The International Court of Justice advisory opinion on Kosovo's declaration of independence.

Kosovo usually considered a sui generis (“of its own kind, by itself, unique”) case,[18] having no analogue with other ethnic or religious groups seeking independence around the world. Despite the particularities, surrounding the case, especially as stated in the “Written statement of the United States of America on the accordance with international law of the Kosovo unilateral declaration of independence”:

“…the resolution of the Kosovo issue is not prejudicial to the resolution of any other problem and cannot be a model for such a resolution. This is a unique issue deriving from the unique autonomous province status of Kosovo within the Yugoslav Federation. The Federation fell apart. The constitutive element associated with it disappeared, but that does not mean that it was automatically transferred to the present-day Republic of Serbia just because the province of Kosovo had been within the Republic of Serbia in federal Yugoslavia.”[19]

I argue that it is not that unique. It is a particularistic case, but it is not unique. There are lots of ethnic and religious groups and movements around the world seeking independence, more rights and/or self-determination like the Palestinians, Kurds and many more. Defining Kosovo as a sui generis case is driven by fears of it starting a precedent for the status of other ethnic separatist group movements. The quest for self-determination is not limited to ’problematic’, ex-imperial or ex-colonial states. Western European democracies aren’t immunized either-the Catalonian question and the 2014 Scottish referendum are examples. I argue that self-determination, understood as a basic principle in international law, grounded in The Charter of the United Nations[20] should be pursued. The mutual respect and utilization of the demands of smaller/non-majority groups in counties of residence would minimise the risk of escalation of violence.

The Kosovo independence is very much disputed and denied. The (ex) Serbian province and the Kosovar Albanians are being blamed for destabilizing the turbulent region of the Western Balkans, often referred to as “a powder keg”. Ambitions for self-determination and independence are neither new, nor exclusive for the region. They are rooted in perceptions for common past and history as well as sense of ethnicity and uniqueness. A fact is also that different ambitions, including that for (re)creation of “Great” states in the Balkans have led to some of the most horrific wars in the 20 century. In conclusion, we should remember and learn from our common history in order to prevent such events in the future.

[1] According to the census, taken in 2011, its population is estimated to be 1 739 825, with ethnic composition of ninety-three per cent  Albanians, one and a half per cent Serbs and five point six per cent of other ethnic groups including Bosniaks, Gorani, Roma, Turks. The figures are according to the Population and housing census 2011. The results for Serbs are possibly unreliable due to the boycott of the census.

[3] Under the 1974 Constitution of Yugoslavia, Kosovo was granted major autonomy, allowing it to have its own administration, assembly, and judiciary, as well as membership in the collective presidency and the Yugoslav parliament, in which it held veto power. Practically, it was given a republican statute.

[4] Ibrahim Rugova, elected the first Kosovar president, as a leader of a broad coalition “Kosovo alternative” in the early 1990s, consisting of both political and civic organisations and structures, pursued a policy of passive resistance.

[5] The KLA – ethnic-Albanian nationalist paramilitary organization that sought the separation of Kosovo from the Federal Republic of Yugoslavia (FRY) and Serbia; until late 1997 it consisted of small resistance groups who carried out low level guerrilla warfare, hoping for international intervention on the Kosovo status question. The Serbian response to the initial KLA attacks was extreme and directed against civilians.

[8] The term "legitimacy" comes from Latin “legitimus”- recognised as legitimate, lawful. Legitimacy means acceptability, tolerance from the public towards a government, decision (law or other normative act), institution or leader. The legitimacy of a policy means its recognition and moral justification from the subordinates. The legitimacy of a political phenomenon does not imply its legally constituted legality, and therefore legitimacy should not be confused with legality. Legitimization does not have legal functions, it is a political phenomenon and legality is a legal one.

[9] Article 2 of The Charter of the United Nations does not allow military interventions in other sovereign countries.

[15] The European Union Rule of Law Mission in Kosovo (EULEX), the largest civilian mission, was approved by the European Council on 14 December 2007.

[16] It was the second declaration of independence by Kosovo's ethnic-Albanian political institutions, the first having been proclaimed on 7 September 1990.

[17] As of 2018, Kosovo (claimed by Serbia as the autonomous province of Kosovo and Metohija) has been internationally recognised by 113 member states of the UN. It has not been admitted to membership in the UN because 2 out of the 5 permanent members of the UNSC (China and the Russian federation) do not recognise Kosovo as an independent country.

Within the European Union, it is recognised by 23 of 28 member-states (Cyprus, Greece, Romania, Spain and Slovakia do not recognise it).

[18] The Kosovo situation is said to have sui generis character in the “Written statement of the United Kingdom on the Request for an advisory opinion of the international court of justice on the question “Is the unilateral declaration of independence by the provisional institutions of self-government of Kosovo in accordance with international law?”, p. 9. 17.04.2009.

[19] Written statement of the United States of America on the Accordance with international law of the unilateral declaration of independence by the provisional institutions of self-government of Kosovo, Annex 1, p. 2. 17.04.2009.

[21] Accordance with International Law of the Unilateral Declaration of Independence in Respect of Kosovo, 22 July 2010, ICJ, Advisory Opinion, p. 406. 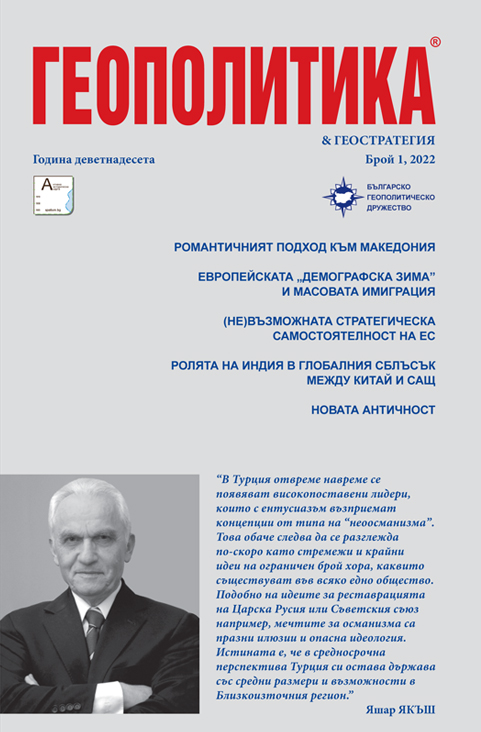